Windows 11 is here and gettting mixed reviews.
Microsoft took a big risk bwith the launch of another operating system, even though many of the changes amount to not much more than window dressing.
Despite its drastically updated look intended to respond to the competition, Windows 11 functions much as Windows 10 does—with notable added features and conveniences.
This major overhaul to the look and feel of the world’s most popular desktop operating system is welcome news: Windows fans finally have something to get excited about.
Windows 11 is a response to competition from Apple and Google, both of which have been nibbling at the edges of the market-leading desktop operating system with slick new designs.

With it’s smooth new look, many are surprised that using it doesn’t feel that different from Windows 10. 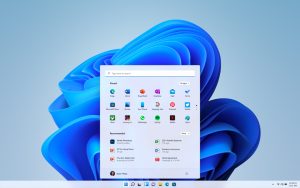 It still runs all the same apps, Windows 11 looks nicer with rounded corners for all windows, the Taskbar icons in the middle, simpler icons, and more elegant Settings dialogs, but it doesn’t feel totally alien or require a whole new process the way Windows 8 did. The new interface is attractive, but if you prefer the more familiar Windows 10-style look, you might just want to stick with Windows 10.

What Are the Requirements and How Can I Get Windows 11?

Windows 11 launched on Oct. 5, 2021 with the upgrade available to recent and new PCs, and then it will was offered free to Windows 10 systems on a rolling basis, based on validated hardware configurations.
The rollout should be complete by mid-2022.

The system requirements for Windows 11 look very low: 1GHz CPU, 4GB RAM, and 64GB storage.
Those are less of a problem than the internet is making them out to be, as they’ve been standard on most PCs for the last six or so years.
The real limiter is the CPU model, which needs to be from about the last four years although we have had it run smoothly on an Intel i5 2nd Gen CPU.
You’ll also need a computer with a TPM security chip and Secure Boot capability, this is built into some CPU’s so worth checking yours!

Microsoft recently rereleased the tool that assesses your PC’s ability to run Windows 11, the PC Health Check app, and the company announced that more PCs will be able to upgrade to it.
Once installed you’ll be able to roll back to Windows 10 for 10 days after upgrading if you prefer the older OS version. Microsoft has announced support for Windows 10 through 2025 so you have plenty of time to think about your future OS.

As mentioned this seems more like a facelift than a new OS. The look is similar with some apps / features moved to more useful locations.

The interface gets rounded corners (like those in macOS) for all windows giving the OS a smoother look. Microsoft’s Fluent Design System, and that system’s new Mica material play a role in the redesign. This semi-transparent look is appearing in more and more included apps and utilities. Much of the new design brings a welcome new slickness and consistency to the Windows interface.

The Taskbar, Start Menu, and File Explorer have changed, many will say NOT for the better!

The Windows Start button has always lived in the lower-left-hand corner of the screen, now its in the centre, as you run more programs, it moves a bit more to the left so it’s never in the same postion. There is an option to position it back in the left corner, this level of personalisation is much welcomed!

One feature I don’t like is the taskbar icons, you could have the icon and its title in the bar on previous versions, no we have a dot like Apple OS, urgh!

The Start menu gets a major overhaul in Windows 11. Pinned app buttons are at the top of its panel. Recent and frequent apps and documents are in a section below them.

Windows 11 has a Widget panel, which isn’t entirely new since the News and Interests Taskbar popup that arrived in Windows 10 recently is very similar.

The Quick Settings panel opens when you click on or tap the Wi-Fi, speaker, or battery icon. It shows buttons for Wi-Fi, Bluetooth, Airplane mode, Battery Saver, Focus Assist, and Accessibility, along with sliders for audio volume and screen brightness. A Pencil icon lets you customize what buttons appear, with a choice of Connect (for external displays and audio), Keyboard Layout, Nearby Sharing (like AirDrop for PCs), Night Light, and Project.

Light and Dark mode settings are still in the Personalization > Colors setting area, and the modes look much better than in Windows 10, particularly the dark mode, which uses transparency effectively. Dark mode can now hold its head up proudly when compared with that of macOS.

You can still change system sounds in Settings, but the new Windows 11 default set of sounds is slick, quick, and modern.

Windows offers multiple virtual desktops, you can now use a four-finger swipe to move back and forth, something Mac users have long enjoyed.

As for new gaming technology, Windows 11 introduces Auto HDR and DirectStorage. The first expands the color space to reveal superior clarity even with non-HDR game titles. The second technology, DirectStorage (a subset of the Xbox Velocity Architecture) can speed up game loading times by bypassing the CPU and allowing graphics memory to load directly.

Is it time to upgrade?

Requires a recent CPU
Some interface changes may take getting used to
Some useful tools going away, like Timeline and certain tablet gestures

Please get in touch and we cac discuss your options.